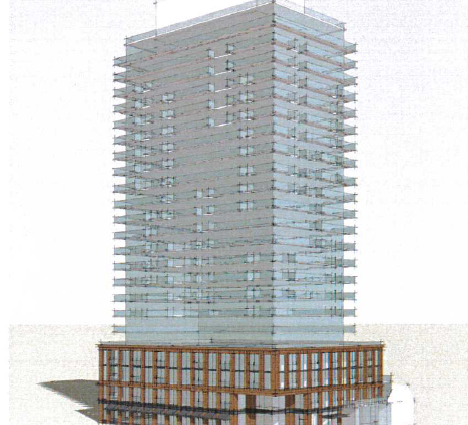 The 905er has learned from multiple sources that Reserve Properties Ltd has withdrawn its appeal of the City of Burlington’s decision on 409 Brant St. If the developer chooses to proceed with its development, the building will have to conform to the seventeen storey limit allowed in 2018.

The planned development of a twenty-four storey highrise at the corner of Brant and James Streets, opposite City Hall and forming a ‘twin tower’ with the twenty-seven storey Carriage Gate building at 421 Brant St, acted as a lightening-rod during the 2018 municipal election. The development also entailed the loss of at least one and possibly two designated heritage properties, one of which was the popular Kelly’s Bake Shoppe.

The appeal is the only example in Burlington of a property appealed under the Local Planning Appeals Tribunal (LPAT) rules enacted by the Wynne Liberal government in 2018. These rules were implemented with a view to strengthening municipalities’ ability to defend Official Plan zoning.

The key change in the 2018 LPAT Act was that developers could no longer appeal a city decision that conformed to the city’s own Official Plan, unless it could be demonstrated to contravene the province’s planning vision, then set out in the Growth Plan for the Greater Golden Horseshoe (GPGGH).

The Wynne government’s rules were almost immediately returned to the former OMB rules, but with even less ‘council-friendly’ conditions, in 2019 by the incoming Ford administration.

Reserve Properties attempted to have the 409 Brant St appeal moved to the new ‘Bill 108’ LPAT rules in 2019, but the tribunal issued a decision against them in January 2020.

History of the 409 Brant St Proposal

Council under then mayor Rick Goldring approved a building of seventeen storeys in the summer of 2018, arguing that the newly passed ‘Grow Bold’ Official Plan would make the city more able to defend any appeal to the OMB, and with the strong implication that anything lower would inevitably lose.

This logic was arguably undermined by the fact that the original Carriage gate proposal for 421 Brant St had been for a much shorter mid-rise building, and it was Burlington Planning Department that urged the developer to submit a high-rise development with setbacks from street level.

Likewise, the city’s plan for an enhanced civic square outside City Hall meant they were willing to trade a small amount of land at the corners of 409 and 421 Brant in return for additional storeys as of right. To this end they had zoned the corners of James and Brant as a ‘Special Planning Area’ in the Grow Bold Official Plan, allowing seventeen storeys instead of the eleven stories allowed in the rest of the Brant St ‘precinct’. With a forty-five degree setback from Brant St, the new Official Plan would have given as-of-right approval for a building of three storeys at Brant St, rising to eleven at John St, but for decision to create the Special Planning Area.

In other words, the city, just months before, had argued that a maximum of eleven stories in the Brant St precinct was a defensible height at appeal. But they then decided to allow an additional five storeys out of arguably little more than a sense of municipal amour propre.

Implications of the Withdrawn Application

City Council approved a seventeen storey building in the face of a packed council chamber and multiple overflow rooms of citizens wishing to delegate in opposition. The reputation – fair or otherwise – that the Goldring council was was not interested in defending, far less of respecting, the public antipathy to highrise development in downtown Burlington, was cemented in many voters’ mind, if it hadn’t been already. Retirements and electoral defeats saw almost a clean sweep of new Councillors elected at the election a few months later.

That reputation for hostility to residents was bolstered by statements from at least two councillors who stated outright that citizen delegates against the proposal were ignorant, ‘entitled’ and even ‘one-percenters’, selfishly delegating against the interests of the less wealthy. It was an argument that might have had more credibility if the cost of even a small downtown condominium wasn’t far beyond the reach of anybody on a moderate income.

Reserve Properties immediately appealed Council’s decision to the new LPAT. That appeal, according to our information, has now been withdrawn. It is a rare ‘win’ for the City of Burlington where the developer has completely abandoned any attempt for even a negotiated outcome for additional height.

The withdrawal of the appeal stands in contrast to what otherwise seems to be an almost inevitable settlement by the City of all appeals to LPAT. While there is no reason to suggest settlements are always the ‘wrong’ outcome, it heightens the perception that municipalities are on the back foot when faced by appeals from developers.

Reserve Properties clearly felt they had no prospect of even a limited win in this case. The implication one might fairly draw is that the Wynne government’s LPAT rules placed the developer in a far weaker position than they would have faced under the previous OMB or current LPAT rules.

What would have happened if the city had not decided to ‘trade’ five extra storeys for a windswept corner of land at Brant and James and instead defended its vision for the rest of Brant St?

What might the development environment in the 905 region have looked liked now if the Wynne government’s vision for LPAT had been allowed to survive?

[Full disclosure: At the time this proposal came to Burlington City Council I was a candidate running for the city’s downtown Ward 2. I delegated twice at Planning Committee and the final Council approval stage in opposition to the city’s approval.]