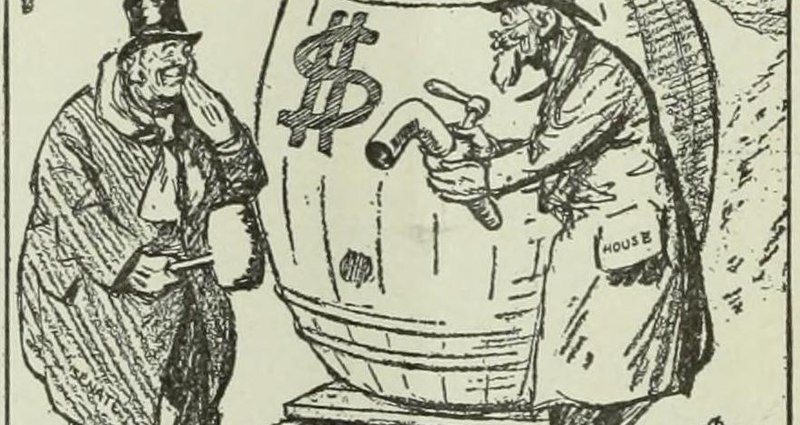 Everything you know about Ontario party funding is wrong: Part 2 of (cough) an infrequent series

Jump to part 1 of the Party Funding series.

The big dirty secret of party fundraising is that hardly anybody donates. Why would you, when the average citizen views all politicians as morally equivalent to sewer rats? And we know they can’t be trusted because the politicians themselves keep on telling us so. The constant din that ‘the other guys are crooks’ leads us to the reasonable conclusion that they must be right: they are all crooks.

So who do you donate to? A pressure group? A charity? Your church, mosque, synagogue or gurdwara? A local foodbank? The Red Cross? The Heart and Stroke Foundation? All these organizations offer a far more uncomplicated ‘feel-good factor’ for your donor dollar. To have a hope of competing with those organizations, political parties need to be able to offer a better deal to potential donors that doesn’t depend on anybody needing to feel particularly good about themselves – hence the tax credits.

Twelve years ago only 1.2% of registered voters donated to Canadian federal parties, and provincial donations are likely far lower. Yet, with tax credits, 1.2% of the population donated over 60% of all funds received by the federal political parties. Our parties are beholden for their existence on a tiny number of generally wealthier people with the disposable income to allow them to donate, with no similar financial incentive to prioritize the opinions of the population at large.

For centrist and moderate parties – the parties who occupy the space where most voters traditionally live (and by ‘centrist’ here, I mean anything between the space usually occupied by the NDP leadership (if not all of the membership) and old school Progressive Conservatives and ‘Red Tories’) – there’s another problem. Citizens donate much more readily to the political extremes than the centre. If you hate the CBC and think it’s a cabal of Communists destroying your freedoms, or believe the cabal is actually a secret society of billionaire business leaders aiming to hook us up to a constant gasoline drip, you are far more likely to give, and give generously, than if you are someone who thinks Canada’s broadly progressive centrist consensus over the last century was ‘not perfect, but, y’know, overall kinda ok’. Worse still, the biggest donations will come in response to the biggest and most hysterical lies and exaggerations. Absent some form of subsidy, the parties that appeal to our basest instincts and most unreasonable fears are likely to do best. And we are already seeing that happening in real life, not theory, both here in Canada, around the world and most obviously in the USA.

Forgotten but not gone? The age of corporate donations

The sectors that used to be willing to donate, and generously, were corporations and unions. Pharmaceutical companies, brewers, developers, non-profit organizations, professional associations and trades unions all had the money and the willingness to spend to make their presence felt by the parties that either formed, or might form, the provincial government.

It was the centrist parties that did among the best from that deal – the more centrist the better.

Far from being overwhelmingly Conservative, many corporations have been deeply alienated by the steady rightwards move of Canada’s right wing parties in the last 25 years. With conservative parties in Canada abandoning their ‘economic safe pair of hands’ credentials in favour irrelevant ‘moral’ debates, climate denialism and a dogmatic attachment to simplistic economic narratives about taxation and debt that credible economists abandoned decades ago, the centre zone occupied by the Liberals in the age of Chretien and McGuinty offered corporations the stability and a lack of nasty surprises that previously they might have looked to the PCs to provide. Many were willing to pay to support it.

And the vast, vast majority of these corporate donations came with no strings attached. Many corporations would donate across the political spectrum, building relationships with politicians in all parties, as well as the people who worked in the ministries relevant to them. And many corporations were far from ‘big business’ or ‘dirty money’. A corporation might be a small non-profit advocating for spending on healthcare, or an environmental group, or a non-profit advocacy group seeking to reduce homelessness, or raise asthma awareness, or … the list is endless.

And while I’m certainly not arguing for a return of corporate donations, there was nothing inherently wrong with any of that – it was the way things had worked since parliament came into existence. Politicians aren’t supposed to be monks, cut off from the people they serve, unable to pick up the phone for fear it is interpreted as unfair dealing. They need to speak directly to the people who make things happen in the province, and they need to hear from unions, non-profits and businesses. If that helped them have money in the bank to fund their next election too, as far as party candidates, staff and volunteers were concerned, it was win-win for everybody involved. At the very least it was a relatively cheap way (with ‘cheap’ ranging from $200 to the maximum donation of around $1,200) in which corporate and union interests–or anybody in Ontario–could get access to a minister and share the things they felt were important. Today a small business owner or non-profit executive director who in the past would attend a party fundraiser and know that their costs were deductible, may find it much harder to get face time with a minister. Is that necessarily a good thing?

But of course, it gets complicated. How do you prove there are no spoken or unspoken quid-pro-quos? Could the donations be–gasp!–“cash for access”?

Well—yes—of course they were. Corporate entities literally paid to attend an event where a minister would be present. They gave, not cash, but cheques for access. But so what? The access corporations and unions paid for was usually not exactly glamorous. In my experience it amounted to standing in somebody’s front room with a glass of cheap wine and a vol-au-vent in somewhat close proximity to an MPP or minister. A quick speech, a quick chat, a quick thank you, and a ‘that’s all folks’ from the minister’s PA before the minister—often visibly exhausted after an impossibly long day—headed off to their ministerial car and the QEW home. It certainly didn’t look from where I was standing like a particularly good deal for the guests, far less like the modern equivalent of power-brokers carving up the province in smoke-filled rooms.

But … was I—am I—naive? Almost certainly. Sitting where I was, usually behind the table where the tickets were collected, or, on one memorable occasion, desperately trying to handle a literal ‘wardrobe malfunction’ as an overloaded coat rack collapsed under the burden of a Canadian winter’s-worth of coats, I wasn’t exactly the sort of person at the front of the line to be included in any discussions of great import.

The corporations clearly felt it was worth the money. Businesses are not altruistic, and nor are many individual non-corporate donors. The presence of the corporation’s name on the party’s list of annual donors was benefit enough for some; the ability to create a friendly impression in a minister’s or MPP’s mind was another. The business of influencing government—‘government relations’—is far more about building long term relationships than obvious deals and quid-pro-quos. Or … it was in the party I volunteered for.

And if you want to obsess about political purity of intent, even the lowliest party volunteer may be involved in political volunteering because they want to get something in return. They may hope it’s a way to network for their business, or to improve their chances of appointment to a public board, or to raise the profile of an issue they care deeply about. At a bare minimum, all party volunteers want to ‘contribute’ or ‘help form policy’—and even those objectives can be interpreted as expecting a greater say in government than other citizens, based on your personal relationship with a politician.

You can make absolutely anything about party politics look sleazy given five minutes’ thought. Yet there are probably few places in modern society more innocently well-meaning than the average riding association board meeting. That’s why I volunteered for so long. Local grassroots politics is chock-full of lovely people, so far divorced from the cliches of political infighting and mythical cash-stuffed envelopes that it’s hard to believe it’s the foundation upon which modern party politics is built. The committee organizing your local church bazaar is probably as Machiavellian as the governing committee of your local riding association.

So here’s the dilemma. Not many people want to donate to party politics, and everybody that does has a ‘reason’ that can be called into question. And while Jay Goldberg of the Canadian Taxpayers Federation pointed out, correctly, that the federal parties have survived the transition away from a per vote subsidy, federal donor contributions are subsidized in the same way as the provincial parties. In other words, the federal parties are still heavily reliant on a taxpayer subsidy too.

The federal parties also benefit from a far higher level of general public interest and engagement because of the constant focus of national media on Ottawa politics. In simple terms, they get much more free advertising. Provincial parties struggle to get any attention outside the writ period of an election, and their membership numbers and donations are usually correspondingly far smaller.

The end result is that provincial parties have been surviving on a shrinking base of members, volunteers and donors for decades. And they are financially induced to pay close attention to the tiny number of people who actually contribute, rather than focus on the needs of the population at large. As our view of party politics as a route to ‘do good’ and bring about beneficial change has decreased, and the rules surrounding who can contribute have tightened, parties have slowly been strangling themselves out of existence.

Out damned spot! Can political donations ever be clean?

What need we fear who knows it, when none can call our power to account?—Yet who would have thought the old man to have had so much blood in him.

It’s not the per vote subsidy that corrupts our politics, it’s the freely given donations, whether from corporate interests or the smallest and most disinterested party volunteer. The so-called ‘unfair’ subsidy that so annoys the Canadian Taxpayer Federation, in contrast, comes with no strings attached, and directly reflects the desires of millions of Ontario voters in a way no other form of party funding does.

Moreover, far from banning corporate donations making the parties purer and more responsive to he public, the ban has, if anything, made parties far more susceptible to the influence of a small number of wealthy donors, giving money in the hope or expectation of benefits coming to their industry, but now hidden from proper scrutiny as a ‘personal’ donation.

Because, although corporate donations have technically gone away, we should be in no doubt about one thing: corporations are still paying to get their voices heard.

The continued presence of corporate funding in Ontario party funding is a point that will be explored in part 3 of this series.

Roland Tanner was formerly Executive VP Golden Horseshoe for the Ontario Liberal Party, and president of Burlington Provincial Riding Association where he worked closely with former MPP Eleanor McMahon. He ran for Burlington’s Ward 2 council seat in 2018. Since co-founding The 905er he is no longer a member of any party and has no plans to run for elected office again.

[This article was edited on June 1 2021 to correct various spelling and grammatical errors.]

2021-05-31
Previous Post: Grebenc Joins, Kearns leaves, Burlington’s Provincial Liberal Race
Next Post: The 905er Gets Real about the Pride Flag, and the Power of Symbols in Halton Region