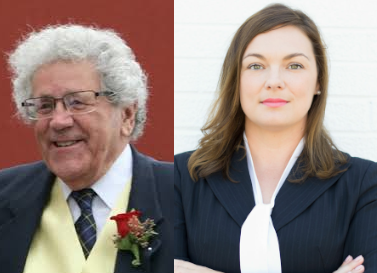 The following is an unedited media release made today by Lisa Kearns, yesterday re-elected to represent Burlington’s Ward 2. The release follows a dispute at a campaign event, and a number of recent articles written by Pepper Parr, editor and publisher of the Burlington Gazette, one of which used the phrase “some duct tape on the mouth would be a good start” in relation to Kearns. More to come.

I am committed to creating and upholding safe places in our community.

Pepper Parr of the Gazette was asked to leave my campaign event on October 6th. I have said numerous times that everyone was welcome into my campaign, however, he has demonstrated through his disgusting use of language designed to incite hurt and embarrassment that this is not the place for him to ‘observe’.

He further shoved his phone in my face in front of my children, family, friends and supporters telling me to ‘call the cops’ as the only way to get him to leave. Which we did. Instead, everyone left the building and he stayed inside. Ate my donuts.

I can take a lot. A lot. But never on my watch will people be used, exploited or insulted. I take that responsibility.

This occurred after he published a comment about me by a competitor that I should have my mouth duct-taped. He once again used this language directly in a more recent article – first hand. This is disgusting language and unacceptable on every accord.

He invited the competitor to my event as we were wrapping up. A competitor who used only toxic misinformation and direct insult as the basis of his campaign. My family, children and supporters did not ask to be near this individual ever, and under the guise of a ‘candidate interview’, the two carried on in an agitated and exaggerated way in the parking lot at 8:30pm.

That is what intimidation looks like. Again – not acceptable, and unjustified, certainly not professional. There have been more articles about me in the election on this forum than anyone else. All negative and amplified by the harassing and relentless comments by one frequent commenter, often masqueraded as ‘a resident writes that…’ only to deliver circular negative comments.

Today, he has refused to take down the photo I posted (with permission) of a minor. He added a twisted narrative around the photo and the minor. This is exactly why he cannot be trusted. There is no journalistic value, just another smear piece.

My message, and yours should be “take it down”.

Enough is enough, Gazette. Do the right thing.

2022-10-25
Previous Post: 905 Round-Up: Bad Trustees, MEXIT and Who’s Ahead in Hamilton?
Next Post: Public Spat Between Kearns and Parr Intensifies