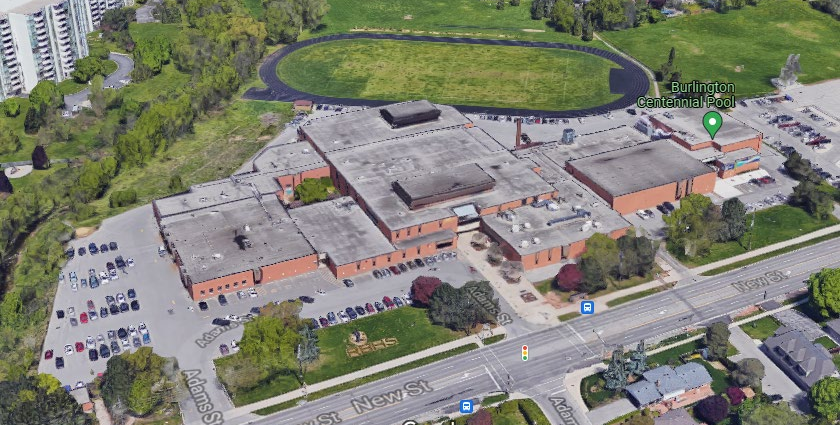 Burlington is a step closer today to buying the former Robert Bateman High School lands from Halton District School Board, with the objective of repurposing the lands and buildings for a ‘community hub’, according to a city press release.

Yet the price offered by Burlington to the school board, any reserve funds that would need to be used to complete the purchase, and implications for the overall city budget and taxation have been hidden from public by the use of an ‘in camera’ meeting (i.e. held behind closed doors, with discussion and details of decisions inaccessible to the public).

Yet it is known that Council has already voted to spend $3,000,000 from the capital budget reserve fund to pay for ‘ongoing due diligence, evironmental, preliminary design, architectural , engineering and project management services for the phased adaptive re-use of the Robert Bateman High School Site’. This would amount to over half of the current capital purposes reserve fund of $5.917 million. At committee stage on December 6th, two councillors, Lisa Kearns and Shawna Stolte, opposed approving the confidential amount to be offered to HDSB to buy Bateman. At council on December 14th, Councillor Stolte was the only councillor to vote against the ‘preliminary’ $3,000,000 in costs.

This contrasts with purchase of lands at former General Brock School in 2009, when the decision to purchase by the city was preceded by months, even years, of public discussion about the appropriate course of action, and the likely cost of the purchase for the city and taxpayer.

While the majority of the public—or those who organized to delegate and petition City Hall—clearly supported the purchase in 2009, the city also made it clear in an open forum what the likely cost was, and where the money would come from.

On the night the contentious decision was finally made in December 2009 (a 5-2 vote in favour), few people who followed Burlington news were in doubt about exactly what it meant for the city budget. The cost was already established as likely to be in the range of $9 million, with $2 million taken from the city’s strategic land acquisition fund.

Even so, just days later, the city held a public consultation session with residents about how best to handle a financial crunch brought about by ‘severe budget challenges’, including, according to one of the councillors who voted against the purchase, the need to pay for the General Brock lands.

But there has been no such public debate about Bateman, although we can make a reasonable guess that a $9 million price tag for prime real estate south of the QEW in 2009 is a lot higher today.

It appears that since 2018 Burlington has been following the often-criticised pattern established in Hamilton of using closed sessions to obscure controversial discussions. Whether this trend is led by the City Clerk, City Manager, or council is not clear, although it is the Clerk who makes the initial call on what matters should be held privately. While the city has not hidden its interest in purchasing Bateman, the dollar amount that councillors will have agreed as the city’s offer for the school lands was made in a closed session late last year.

It is part of a trend that has seen council meetings decrease in importance as a forum where the public and council interact in Burlington. Since the start of the COVID-19 pandemic there has been an absence of well-known ‘regulars’ from the delegation podium at City Hall, as in-person delegates have generally not moved to online delegation. This trend is no doubt welcomed by some councillors, as is, it seems, the ability to attend meetings remotely (perhaps very remotely in some cases) and even with video cameras turned off.

At the same December meeting that approved the city budget and voted $3,000,000 for the preliminary Bateman work, only one person delegated to council, reflecting a general drop in participation since COVID began. Yet councillors were in no rush to return to in-person meetings, even though it appears an extremely simple matter to ensure in-person meetings are safe, and councillors are routinely meeting with residents and staff everywhere except the council chamber. It voted 6-1 on a motion brought by Councillor Rory Nisan to delay any discussion of changing the current meeting arrangements until March or April 2022 because of ‘ongoing caution’ and because ‘the numbers speak for themselves’. Yet Mayor Marianne Meed Ward would join Ontario’s ‘big city mayor’s just over two weeks later in voting unanimously to support a call for the province to re-open public schools on January 7th.

Together, these decisions against prioritising public participation and in favour of spending secrecy all run contrary to the claimed culture of public openness and participation that the mayor claims has been established since 2018. Instead, multiple multi-million dollar decisions for unknown amounts, supported by unknown budgets and reserves, are repeatedly made behind closed doors, even though city precedent makes it clear no such blanket restriction on discussing the ballpark costs of purchases is warranted.

When added to the fact many—in fact most—large development decisions today happen behind closed doors, it increasingly appears like the City of Burlington seldom votes publicly on things residents are likely to find controversial.

A Second Major Purchase with a Hidden Price Tag This Month

Monday’s announcement regarding Bateman follows news of the purchase of ‘Lions Club Park’ in Ward 2 on January 28th, a small but important parkette located on one of the main routes into downtown. The city has claimed the purchase is at a ‘substantial discount’ on market value, per a formula worked out with Lion’s Club in 2002. However the amount to be paid by the city has again not been disclosed. Recent highrise development plans on neighbouring streets in downtown Burlington leave no doubt about the value of the lands to developers. Even a substantially discounted purchase may have come with a high price tag. Why, given the Lion’s Club has already accepted the offer, can’t the public learn the price?

Lands currently owned by the Halton School Boards in Burlington were generally sold to them decades ago for a nominal $1 fee. In essence the sales seem to have been viewed as long-term loans of public property owned by the city for use by schools, with the asssumption land would revert in the event the lands was no longer needed.

The Harris government put an end to that, and changed the law to require surplus school board lands to be sold at market rates, with the money raised going back into funding new schools. Board-owned property in Burlington, as in many 905 cities, today makes up a significant proportion of the total “public” greenspace, yet it has no permanent protection from development, and is located in some of the most desireable and expensive neighbourhoods.

Bateman High School closed in 2020 following a Halton board ‘Program Accomodation Review’ decision in 2017. Multiple schools in south Burlington were operating far below capacity, due to a wealthy but aging population, with the result that some subjects were unavailable in below-capacity schools, or only available via online teaching.

Downtown’s Central High School was initially rumoured likeliest to close, but a high profile citizen-led campaign, prominently supported by then downtown councillor, now mayor, Marianne Meed Ward, was blamed by some for trustees choosing Bateman to close instead. Meed Ward enlisted the support of PC leader Patrick Brown and then former, now current, MPP Jane McKenna to hold a press conference at Queen’s Park that opposed any closures, with the PCs taking the opportunity to embarass the Ontario Liberal government and Burlington’s then MPP Eleanor McMahon, but it was the campaign to save Central that dominated the local debate.

The focus on saving Central, and the support provided by council’s most well-known incumbent a year before she ran for mayor, certainly did nothing to help Bateman. The fact Bateman offered programs to students with physical and mental challenges and an emphasis on vocational training via the Ontario Youth Apprenticeship Program, unavailable at any other Halton high schools, was also not enough to save it. Nor was the re-election of Jane McKenna as part of a PC landslide in 2018, with the new government displaying no interest in reversing the decisions made by board trustees.

Today, the purchase of the Bateman lands, which includes the school buildings as well as the surrounding greenspace (unlike the smaller General Brock purchase), offers the potential for political wins for Mayor Meed Ward and Ward 5 Councillor Paul Sharman in an election year. Both appear highly enthusiastic about the proposal. Sharman’s enthusiasm might be argued to contrast with his usual concern with city finances and the interests of taxpayers, but the proposed community hub would be in his ward.

And there is no doubt that, given the choice, most residents’ preference would be to keep the Bateman property in city hands, while city policy to try to protect and augment public greenspace whenever possible. A community/learning hub in east Burlington has many reasons to be welcomed.

The city may even have already mitigated its costs. Brock University has signed a memorandum of understanding with Burlington that would presumably see costs shared as Brock moved its current Hamilton-based teacher-training facility to part of the Bateman site—but what Brock University has promised to pay is unknown.

Relocation of existing city services to the Bateman site, for instance the Appleby Library branch, could also reduce the overall cost to the city, but details are unlikely to appear until after the deal for a purchase has been completed.

As a result, the claimed community support for keeping Bateman in public hands is not informed by knowledge of the scale of investment required, or an understanding of how it will affect city reserves or other city projects or land acquisitions.

How might the Bateman purchase impact city’s ability to do what the public want in another looming decision—whether to save LaSalle Park? The beloved LaSalle lands on Burlington Bay are owned by the City of Hamilton, and have been leased to Burlington for $1 a year under a 40 year agreement since 1983. But the park’s lease ends in 2023, and a deal to protect it’s future needs to be made before the end of 2022—and likely before the municipal election in October takes all major decisions off the table.

Fears exist that the current market value of the LaSalle lands means Hamilton has no interest in doing Burlington a favour in terms of any sale or renewed lease. On June 3rd 2020 Hamilton’s Councillor Sam Merulla moved a successful motion directing “that [Hamilton’s] Corporate Real Estate Office, in collaboration with other relevant divisions, be directed to undertake a review of the value and implications of alternative disposition (sell, lease, develop, operate) options for LaSalle Park”, in large part because “the City of Burlington has from time to time expressed a desire to acquire LaSalle Park (barring that to renew the lease), but not at a price acceptable to the City of Hamilton”.

It is difficult not to read those words as a ‘pay up or else’ warning shot to Burlington, and a clear indication that Hamilton expects a better deal than $1 a year for the continued existence of the park in Burlington’s Aldershot neighbourhood. Does Bateman’s multi-million dollar purchase undermine the arguably more important objective that LaSalle be protected in perpetuity for residents?

When all is said and done, Burlington residents might still support the Bateman purchase when given a full understanding of the costs and the wider implications of its purchase for the city. They did in the case of General Brock. But given the city’s current habit of secrecy when making decisions of note, we are unlikely ever to know.