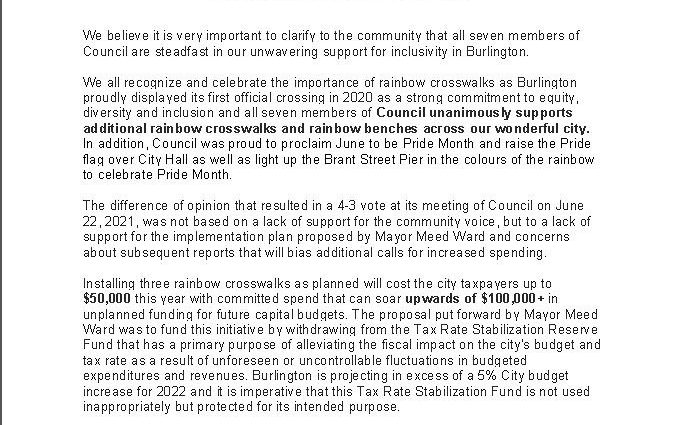 Three of Burlington’s seven member council have issued a strongly worded rebuttal that appears to be a response to a message sent at 6:40am this morning by Mayor Marianne Meed Ward via her Twitter account. The tweet tacitly stated that three unnamed councillors, who could be deduced to be Councillors Lisa Kearns (Ward 2), Shawn Stolte (Ward 4) and Paul Sharman (Ward 5), had voted against additional Rainbow Crosswalks in Burlington.

The three councillors issued a clarification at 4pm insisting that all seven councillors are ‘steadfast in our unwavering support for inclusivity in Burlington’. ‘Council unanimously supports additional rainbow crosswalk and rainbow benches across our wonderful city’.

The councillors claim that the mayor’s plan had a cost of $50,000 attached for 2021/21 and could ‘soar upwards of $100,000+ in unplanned future funding for future capital budgets.’ In particular, the councillors disagreed with the mayor’s proposal to fund this initiative by taking funds from the Tax Rate Stabilization Reserve Fund, which exists to reduce large fluctuations in the tax rate due to unexpected and unplanned costs. Such costs are certainly part of Burlington’s reality at present, owing to the ongoing impact of COVID-19.

They continue, ‘Burlington is projecting in excess of 5% City budget increase for 2022, and it is imperative that this Tax Rate Stabilization Fund is not used inappropriately, but protected for its intended purpose.’

Kearns, Stolte and Sharman insist that their plan would have resulted in rainbow crosswalks being adopted in every ward in Burlington eventually, but at a slower rate of installation. They claim two new crosswalks could have been implemented this year, and any additional funds could have been assigned to ‘critical support to individuals in the 2SLGBTIAQIA+ community’.

A motion brought forward by Stolte and Sharman had requested council consider one new crosswalk each year at the same cost as the one installed on Lakeshore Road in 2020 for $10,000. That motion was defeated. However all three councillors insist this was a more fiscally responsible plan that negated the need to use reserve funds.

The extent to which the councillors have been angered by the implication of the mayor’s messaging, however, becomes clear in the last third of the statement.

Our 2SLGBTQIA+ youth are all too familiar with the struggles of performative activism during Pride Month. The City of Burlington needs to welcome a balance between performative and real support for the community.

The implication that the decision to install three crosswalks immediately, and consider three more next year, is not only financially irresponsible but also “performative”, raises the stakes of this statement considerably. While all councillors involved will have voted against the mayor’s preferred option on decisions before—as is routine in municipal government—there is a sting to these words that suggests Kearns and Stolte have had enough of operating in the mayor’s shadow, and will not accept the mayor giving an implication about them that could be interpreted by residents as indicating homophobia.

For those who claim that Meed Ward is often too concerned with superficial self promotion at the expense of difficult or profound changes, this statement may appear to be some vindication. It is ironic, therefore, that the point at which a minority of councillors definitively set out their opposition to the mayor, it should be over the cost of what may have been expected to be a “low cost win” for City Hall public relations.

It is also a risky hill to choose to die on for the three councillors. Public support for the Rainbow Crosswalks is high, as is anger at the behaviour of Halton Catholic District School Board with regard to the Pride flag. It would be easy to characterize the three councillors’ position as an excessive concern for money that is hardly the point in the face of the homophobia expressed by HCDSB.

They may need to point to a longer pattern of use of reserve funds in Burlington since 2018 to make a strong case for financial mismanagement by the mayor, and it is certainly not the first time Burlington’s council have voted to dip into reserve funds since 2018 as a way to keep costs away from taxpayers. Cities, unlike provinces and countries, cannot take on debt, so using money intended for unexpected contingencies carries a degree of risk.

Ultimately the issue of the cost of the crosswalks is not central. What is central is that a mayor who promised a more collegial council used Twitter to make an implication that in the current climate, and current month, has serious implications: that three councillors voted against supporting Burlington’s 2SLGTBTQIA+ communities. For the mayor to criticize her fellow councillors over their judgment of the best use of city finances is one thing. To give any implication those councillors did not support 2SLGBTQIA+ residents is quite another.

The mayor could have said nothing—she won, and her motion passed. A tweet mentioning that she was pleased council had voted in favour of her motion was all that was required. But she chose to put it in a way that appears to have been designed to embarrass Kearns, Stolte and Sharman. It is that which has brought into the open the grumbling frustrations that have existed among some councillors for well over a year.

This article was edited on June 24th 2021 to correct various spelling and grammatical errors.

2021-06-23
Previous Post: Lisa Kohler of Halton Environmental Network asks “How do we have a sustainable economy?”
Next Post: The 905 Round Up – What’s in a Name? Macdonald and Ryerson Renamings